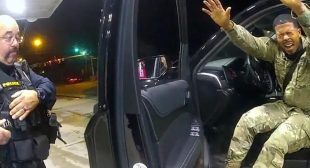 A Virginia police officer who pepper-sprayed and threatened a uniformed Black and Latinx Army officer during a routine traffic stop was fired Sunday after video footage of the incident was published, sparking nationwide outrage.