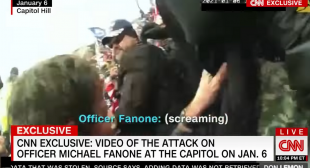 A new video was released from DC cop Michael Fanone that came from his bodycam during the Jan. 6 attack.

Revealed on CNN Don Lemon’s Wednesday show, the horrifying scene unfolds as some in the crowd ask others not to hurt Fanone. At one point, when he is tased he can be heard saying, “I have kids.”