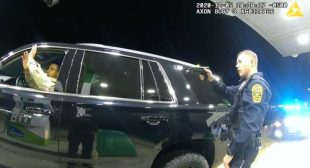 Caron Nazario was driving his newly purchased Chevy Tahoe home when two police officers pulled him over in Windsor, Virginia, whipped out their guns, and started barking orders.

With their weapons raised, the officers demanded that Nazario, a Black and Latino man, get out of the SUV. Nazario looked in the mirror and saw he was being held at gunpoint, then placed his cellphone on his dashboard to film the December 5 encounter. He repeatedly asked to know what was going on. At one point, he even admitted to being afraid to leave the vehicle.

“Yeah, you should be,” one of the officers responded.

Nazario, a second lieutenant in the U.S. Army Medical Corps, was coming home from work and in full uniform at the time.

“I’m serving this country, and this is how I’m treated?” Nazario told the officers, according to his cellphone video.