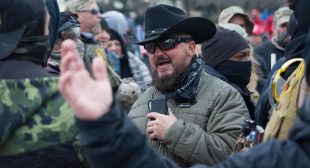 Members of the ultranationalist street gang known as the Proud Boys were easy to spot at the protests that flared across the United States throughout 2020, often in the middle of a brawl, typically clad in black and yellow outfits.

But in December, as the group’s leaders planned to flood Washington to oppose the certification of the Electoral College vote this week for President-elect Joe Biden, they decided to do something different.

“The ProudBoys will turn out in record numbers on Jan 6th but this time with a twist…,” Henry “Enrique” Tarrio, the group’s president, wrote in a late-December post on Parler, a social media platform that has become popular with right-wing activists and conservatives. “We will not be wearing our traditional Black and Yellow. We will be incognito and we will spread across downtown DC in smaller teams. And who knows….we might dress in all BLACK for the occasion.”