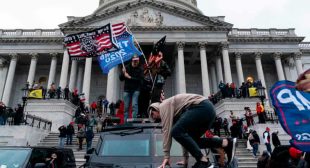 Audio and chat logs reveal that at least two insurrectionists who broke into the Capitol on 6 January used Zello, a social media walkie-talkie app that critics say has largely ignored a growing far-right user base.

“We are in the main dome right now,” said a female militia member, speaking on Zello, her voice competing with the cacophony of a clash with Capitol police. “We are rocking it. They’re throwing grenades, they’re frickin’ shooting people with paintballs, but we’re in here.”

“Jess, do your shit,” said another. “This is what we fucking lived up for. Everything we fucking trained for.”