The truth about Venezuela: a revolt of the well-off, not a ‘terror campaign’ 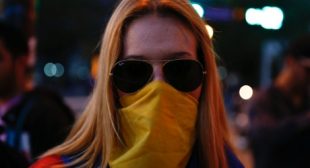 Images forge reality, granting a power to television and video and even still photographs that can burrow deep into people’s consciousness without them even knowing it. I thought that I, too, was immune to the repetitious portrayals of Venezuela as a failed state in the throes of a popular rebellion. But I wasn’t prepared for what I saw in Caracas this month: how little of daily life appeared to be affected by the protests, the normality that prevailed in the vast majority of the city. I, too, had been taken in by media imagery.

Major media outlets have already reported that Venezuela’s poor have not joined the right-wing opposition protests, but that is an understatement: it’s not just the poor who are abstaining – in Caracas, it’s almost everyone outside of a few rich areas like Altamira, where small groups of protesters engage in nightly battles with security forces, throwing rocks and firebombs and running from tear gas.

Walking from the working-class neighborhood of Sabana Grande to the city center, there was no sign that Venezuela is in the grip of a “crisis” that requires intervention from the Organization of American States (OAS), no matter what John Kerry tells you. The metro also ran very well, although I couldn’t get off at Alta Mira station, where the rebels had set up their base of operations until their eviction this week.

I got my first glimpse of the barricades in Los Palos Grandes, an upper-income area where the protesters do have popular support, and neighbors will yell at anyone trying to remove the barricades – which is a risky thing to attempt (at least four people have apparently been shot dead for doing so). But even here at the barricades, life was pretty much normal, save for some snarled traffic.