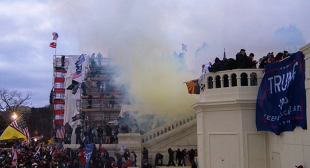 According to CNN, the federal agency’s investigative illustration offers a startling depiction of the Capitol riots that is completely different from the rhetoric that former President Donald Trump and his right-wing conservative followers have attempted to perpetuate. Although Trump has attempted to downplay what has been described as “anti-police violence” at the Capitol, the Justice Department investigation suggests otherwise.