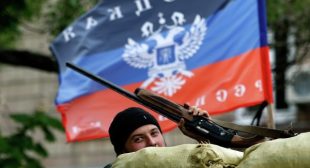 Berlin newspaper Bild presented this topic to the agenda yesterday, after being the first to reveal the participation of 400 mercenaries of American society Academi operations in Ukraine. New revelations suggest the nature and extent of the activities of these companies, who use the State, the Pentagon and other U.S. departments in their foreign operations department.

Currently the private company – or rather the security service – Academi, is led by retired General Craig Nixon. The latter is an expert in special operations: he served in Panama, Somalia, Bosnia and Herzegovina, Afghanistan and Iraq.

He sits on the supervisory board of the company with the former Secretary of Justice of the George W. Bush administration, John Ashcroft, the former Admiral Bobby Inman and former legal consultant to the White House Jack Queen. Near the middle of the Pentagon and Republicans.
Academi, which is headquartered in McLean (Virginia), is a true consortium. Its annual turnover exceeds $ 1 billion. It has three training camps in North Carolina, Connecticut and California to train fighters. According Academi, clients are governments and private institutions, and society sends a mission to 20,000 people per year.

Information on the presence of mercenaries in Ukraine was revealed through a leak. Initially, Bild referred to information received by the BND – the German intelligence services – the CIA and transmitted at a closed meeting in the office of Chancellor Angela Merkel. It is obvious that the military interference such forces diverges with the Berlin line advocating negotiations in the Ukrainian crisis. It would have been too risky for daily invent scoop on mercenaries, especially since it was taken without hesitation by other media.

This revelation certainly alarmed Academi. Few hours after the publication of the article in Bild the Academi Vice President Susan Kelly, head of “strategic initiatives” sent a denial to the site Zeit Online. According to her, the men of his company are not present in Ukraine and sending them on site is not intended. But apart from the sources of information mentioned in the press there are also video evidence.

The British Daily Mail interviewed the expert Nafiz Amad London Institute of Political Studies, the possibility of deducing from these videos if the soldiers therein were American mercenaries. “It’s hard to say but it’s definitely doable,” said the expert. In case it may be questioned whether a Russian propaganda he added: “The uniform is that of American mercenaries. And men on the videos do not look Russian. “