Alex Jones is claiming that he coordinated with the Trump White House on Jan. 6: report 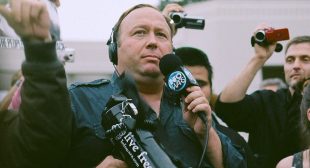 Free Speech TV, in a page for David Pakman’s show, explains, “The Infowars host made the claim last week that he even put up $500,000 of his own money to make it happen. Jones said, ‘The White House told me three days before: We’re going to have you lead the march.’ He went on to say that 30 minutes before the end of Trump’s speech at the Rotunda, the Secret Service planned to take Jones out of the crowd to the spot where the march was supposed to begin. He went on to say, ‘Trump will tell people: Go, and I’m going to meet you at the Capitol.’ Jones’ statements are basically a full-on admission about his involvement in the riots, although he can always hide behind saying he did not intend for the rally to get violent.”