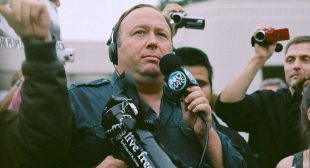 The U.S. Department of Justice on Friday announced charges against InfoWars co-host Owen Shroyer in connection with the Capitol riot on Jan. 6. Shroyer, who hosts a Web series on the conspiracy-driven network run by Alex Jones, is facing charges of “disorderly conduct and entering a restricted area of Capitol grounds,” according to Mother Jones.