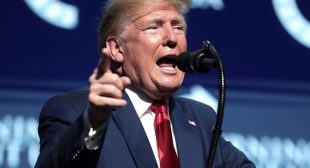 With no one else to blame for his own election defeat, President Trump has zeroed in on one of his earliest Congressional backers, House Minority Leader Rep. Kevin McCarthy, R-CA.According to the New York Times’ Maggie Haberman, Trump is spending his final moments in the White House fuming because he is still convinced that he won the election. In keeping with his aversion to personal responsibility, Trump has now put a target on his once stalwart ally, who has, as of late, not shown the unconditional support he demands.