Trump in the White House: An Interview With Noam Chomsky 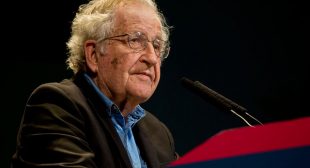 [Many of] the angry and disaffected are victims of the neoliberal policies of the past generation, the policies described in congressional testimony by Fed chair Alan Greenspan — “St. Alan,” as he was called reverentially by the economics profession and other admirers until the miraculous economy he was supervising crashed in 2007-2008, threatening to bring the whole world economy down with it.

As Greenspan explained during his glory days, his successes in economic management were based substantially on “growing worker insecurity.” Intimidated working people would not ask for higher wages, benefits and security, but would be satisfied with the stagnating wages and reduced benefits that signal a healthy economy by neoliberal standards.