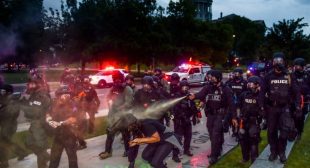 Black Lives Matter, Indigenous, anti-war, and other progressive activists reacted with a complete lack of surprise to data reported by The Guardian on Thursday that shows U.S. police are three times more likely to use violence against left-wing and social justice protesters than against those on the political right.

The report, based on statistics from from the U.S. Crisis Monitor—a database created this spring by researchers at Princeton and the nonprofit Armed Conflict Location and Event Data project (ACLED)—found that the overwhelming majority of the thousands of total protests across the nation over the past year have been peaceful.

While most demonstrations in general were not attacked by police, officers used tear gas, rubber bullets, beatings with batons, and other violence against protesters at 511 left-wing events as opposed to just 33 right-wing ones since April 2020, according to ACLED data.