Slaughterhouse workers are more likely to be violent, study shows 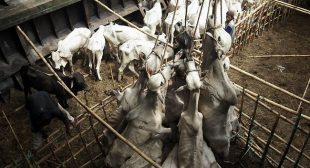 MEATWORKERS are more prone to violence  and women are the worst, according to a new study.
People who work in abattoirs are more likely to be desensitised to suffering, which in turn could make them more likely to be violent towards humans, the research published in the Society and Animals journal found.

Overseas research has found that towns with abattoirs have higher rates of domestic violence and violent crimes including murder and rape, which prompted the Australian team to investigate the situation here.

Flinders University senior sociology lecturer Dr Nik Taylor said it had been established that the more positive a person’s attitude to animals, the lower their aggression levels, and that the reverse is also true – if you’re cruel to animals, you’re more likely to be violent to humans.
She found that meatworkers’ aggression levels were “so high they’re similar to the scores… for incarcerated populations”.