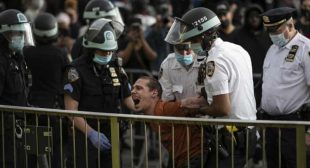 The vast majority of citations and charges against George Floyd protesters were ultimately dropped, dismissed or otherwise not filed, according to a Guardian analysis of law enforcement records and media reports in a dozen jurisdictions around the nation.

But some prosecutors and law enforcement observers charge that departments carried out mass arrests as a crowd control tactic, as a means to silence peaceful protesters, and as a public relations strategy designed to turn the public against demonstrators by making them appear more violent than they were. And what’s more – some of the citing officers never witnessed the protests in the first place.