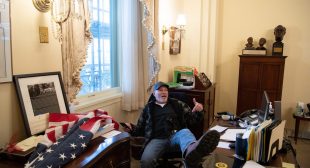 A DC police officer says off-duty police officers and members of the military, who were among the rioters, flashed their badges and I.D. cards as they attempted to overrun the US Capitol.

“National security equities” may have been among the records stolen from the Capitol on Wednesday when pro-Trump insurgents stormed the building and looted several congressional offices, the Justice Department said in a briefing Thursday.

“If this were an organized, fully intent terrorist group — and there were certainly terrorist activities yesterday, but I mean, al Qaeda style — they could have killed a lot of representatives and god knows what else,” Gallego said. “There has to be a full accounting of what happened here.”