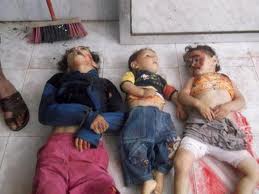 Footage showing the results of an alleged massacre in the Syrian city of Hama in April has been obtained by RT. Sources say that opposition rebels committed the atrocity.

The video shows the bloodstained bodies of four victims lying on body-bags on the floor of a morgue. It then goes on to show a number of bodies, including those of women and children in a house t