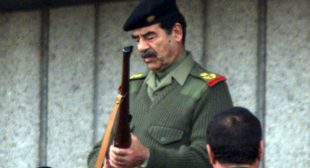 U.S. government may be considering military action in response to chemical strikes near Damascus. But a generation ago, America’s military and intelligence communities knew about and did nothing to stop a series of nerve gas attacks far more devastating than anything Syria has seen, Foreign Policy has learned.

In 1988, during the waning days of Iraq’s war with Iran, the United States learned through satellite imagery that Iran was about to gain a major strategic advantage by exploiting a hole in Iraqi defenses. U.S. intelligence officials conveyed the location of the Iranian troops to Iraq, fully aware that Hussein’s military would attack with chemical weapons, including sarin, a lethal nerve agent.