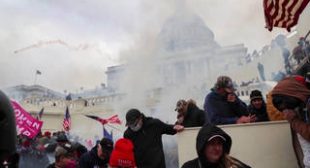 On the second day of former President Trump’s second impeachment trial, House impeachment managers presented detailed documentation of the events leading up to the January 6 insurrection and shared dramatic new footage of the violence as it unfolded.

We air excerpts of video from security cameras, which show the pro-Trump mob searching the Capitol building for lawmakers, including Republicans like Vice President Mike Pence, coming within about 100 feet of the room where he was sheltering with his family. House impeachment managers also played audio of Capitol Hill police officers seeking backup.