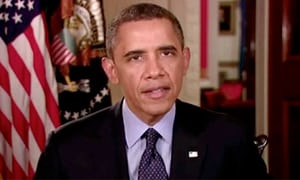 The most extremist power any political leader can assert is the power to target his own citizens for execution without any charges or due process, far from any battlefield. The Obama administration has not only asserted exactly that power in theory, but has exercised it in practice. In September 2011, it killed US citizen Anwar Awlaki in a drone strike in Yemen, along with US citizen Samir Khan, and then, in circumstances that are still unexplained, two weeks later killed Awlaki’s 16-year-old American son Abdulrahman with a separate drone strike in Yemen.

Since then, senior Obama officials including Attorney General Eric Holder and John Brennan, Obama’s top terrorism adviser and his current nominee to lead the CIA, have explicitly argued that the president is and should be vested with this power. Meanwhile, a Washington Post article from October reported that the administration is formally institutionalizing this president’s power to decide who dies under the Orwellian title “disposition matrix”.