Alex Salmond RT show to be probed by Ofcom 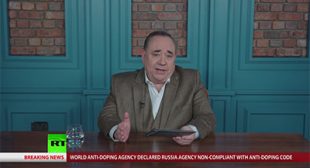 THE broadcasting watchdog has launched an investigation into Alex Salmond’s TV show.

Ofcom is examining whether the former First Minister’s debut on a Kremlin propaganda channel breached guidelines on accuracy and “materially misled” viewers.

The November 16 episode of the Alex Salmond Show on RT proved controversial because of a series of “tweets” Mr Salmond read out on air.