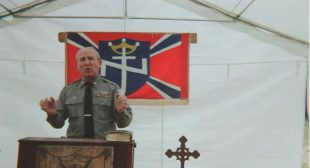 The former head of the American Nazi Party ran for the Republican nomination of Congress in Illinois’ 3rd Congressional District. No Republican stepped up to oppose him.

On Tuesday, despite his vocal Holocaust denial, his anti-Semitic rhetoric, and his white supremacist views, 20,339 Illinois Republicans, according to preliminary totals, cast their ballots for Arthur Jones.

Jones’ Nazi-sympathies were not a secret going into election day.