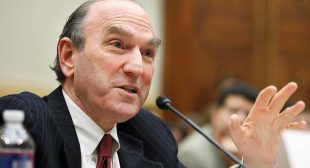 ﻿Abrams sought to ensure that General Efraín Ríos Montt, Guatemala’s then-dictator, could carry out “acts of genocide”—those are the legally binding words of Guatemala’s United Nations–backed Commission for Historical Clarification—against the indigenous people in the Ixil region of the department of Quiché, without any pesky interference from human-rights organizations, much less the US government.

As the mass killings were taking place, Abrams fought in Congress for military aid to Ríos Montt’s bloody regime. He credited the murderous dictator with having “brought considerable progress” on human-rights issues. Abrams even went so far as to insist that “the amount of killing of innocent civilians is being reduced step by step” before demanding that Congress provide the regime with advanced arms because its alleged “progress need[ed] to be rewarded and encouraged.”