What the Western Media Won’t Tell You: Crimean Tatars and Ukrainians Also Voted to Join Russia 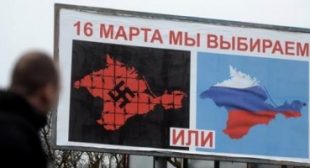 The final tally of the vote was 96.77 percent in favor of joining the Russian Federation, and 2.51 percent against.

According to official data, Russians constitute 58.32% of the population of Crimea, 24.32% are Ukrainians and 12.10% are Crimean Tatars.

The Guardian, in a slither of media disinformation intimated that the Tatars feared a wave of repression if Crimea were to join the Russian Federation.