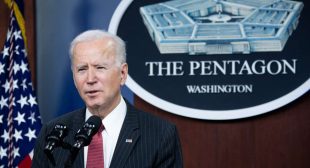 Over the past 20 years, the U.S. has spent $6.4 trillion on wars that have served only to further destabilize the Middle East, cause hundreds of thousands of deaths and enrich military contractors. If that money had been spent on infrastructure and clean energy instead of destructive and deadly wars, the U.S. could have had a fully renewable energy grid by now. The Pentagon is one of the most egregious uses of trillions of dollars.

That $6.4 trillion doesn’t even include the regular, non-war Pentagon budget. President Biden’s $2.3 trillion jobs package works out to about $280 billion a year. The last time the military budget was less than that amount was 1951.