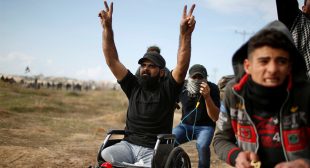 A disabled Palestinian man missing both legs is among those killed by Israeli security forces that opened fire on demonstrators in the West Bank and along the border with Gaza, Gaza’s health ministry said.
Abu Thurayeh, 29, was shot dead east of Gaza City, according to Gaza’s health ministry as cited by the Times of Israel. He is one of four Palestinians who were killed during a protest over the decision to move the US embassy to Jerusalem.