Gaza Student: An Israeli Bomb Killed My Pregnant Cousin. The US Is Complicit. 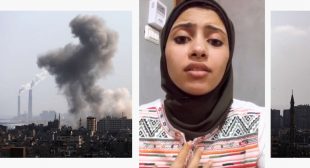 Last week, Alshaer’s pregnant cousin was killed in an airstrike. While Alshaer herself remains “physically OK,” Alshaer said on Monday that her family in still not safe from Israeli airstrikes. A street going to the nearby Al Shifa hospital has been bombed, she said, making it impossible for ambulances to get there. At least 192 people, including 58 children, have been killed in Gaza, and Israeli forces have killed at least 13 Palestinians in the occupied West Bank, according to reports.