Seeing Gaza Through the Lens of Yaser Murtaja, a Palestinian Journalist Killed by Israel 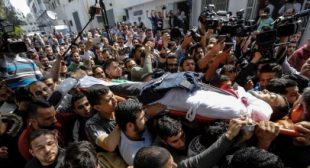 YASER MURTAJA, A Palestinian photojournalist, was one of nine civilians killed by Israeli snipers on Friday in Gaza, but his death was perhaps the clearest rebuke to Israel’s official position that its sharpshooters have only fired live ammunition at “instigators” among the crowds of protesters, in a “precise, measured way” to protect Israelis on the other side of the perimeter fence.

That’s because images taken by Murtaja’s colleagues covering the protest, moments before and after he was shot, show that he was wearing a blue flak jacket clearly marked with the word “PRESS” in capital letters on a white background across his chest. The bullet apparently entered his abdomen through a sma