US, UK, keep silence over Bahraini regime crimes – no ‘Democracy’ for u.s. ally 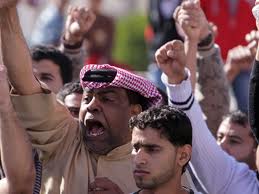 Human rights groups and Bahraini opposition accuse the Manama regime of torture and violating human rights on a massive scale since the beginning of a popular revolution in the Persian Gulf country last year.

Bahrainis have been staging demonstrations since mid-February 2011, demanding political reform and a constitutional monarchy, a demand that later changed to