Before 2001 Invasion, Bush Admin Declared Taliban an Ally in the War on Drugs 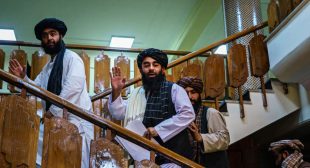 Just months before the Taliban became an enemy in the war on terror, President George W. Bush’s administration declared the fundamentalist rulers of Afghanistan an ally in the global “war on drugs.”

In early 2001, narcotics officials in the United States praised a ban on poppy cultivation instituted by the Taliban that appeared to wipe out the world’s largest crop of opium poppies in a year’s time, even as aerial images raised suspicions about large stockpiles of heroin and opium on Afghanistan’s northern border. Secretary of State Colin Powell announced a $43 million gift to the Taliban that was broadly seen as a reward for banning opium cultivation even as farmers were hammered by a drought.