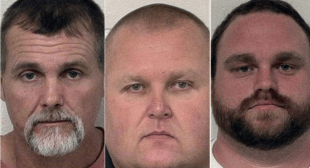 Former sheriff’s deputies Henry Lee Copeland, Michael Howell and Rhett Scott have been indicted in connection with the death of Eurie Lee Martin. On July 7 Martin was walking, presumably to see family—it was his birthday—when he stopped to knock on someone’s door asking for a glass of water. The person, not knowing Martin, told him to leave and then called the police. Three officers responded to the call and found the 58-year-old Martin—who suffers from schizophrenia—walking down the street. According to those police, Martin didn’t respond to them and then a fight broke out between he and the officers, they tased him and then he went into respiratory distress at which time they called for EMS, who arrived too late to help Martin. But they didn’t expect a passing motorist to have captured some of the event on video.