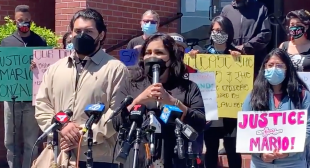 The family of a 26-year-old man, Mario Gonzalez, is demanding an independent investigation into the California man’s death following the release Tuesday of body camera footage by the Alameda Police Department which shows three officers kneeling on his back and shoulders for nearly five minutes before he loses consciousness—differing from the account given by the department earlier this month.

Gonzalez, who was the father of a four-year-old son and the caretaker of an adult family member with autism, was killed “in the same manner that [former Minneapolis police officer Derek Chauvin] killed George Floyd,” said his brother at a press conference Tuesday.