There’s Nothing Complicated About What’s Happening in Palestine 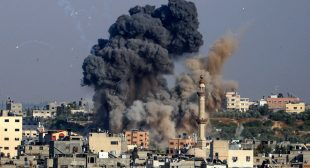 The mainstream media is habitually attached to diverting almost every conversation about the death of Palestinians toward Hamas and its rockets. On the morning of May 11, the head of the Palestinian Mission to the UK, Husam Zomlot, was on BBC Newsnight, explaining that the reactionary measures of the group (which was initially financed by Israel in its desperation to counter the secularists in the Palestinian Liberation Organization) should not outweigh the human rights violations that occur on a daily basis and result in a growing death toll. Palestine does not find itself in a power vacuum suddenly governed by Hamas: it is an intentionally destabilized region, much of which functions as an open-air prison for Israel to control.