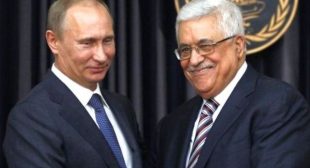 The two leaders will hold talks regarding Putin assuming a more supportive role following the United States’ recognition of Jerusalem as Israel’s capital. On Sunday, Palestinian officials said Abbas will seek the help of the Russian president to implement an international multilateral mechanism for sponsoring the peace process.

“The Palestinian side insists of forming a multilateral approach to overlook the peace process with the Israeli side,” Abbas advisor, Majdi Khalidi, told Voice of Palestine in an interview.