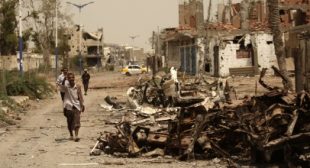 IN 2010, President Obama directed the CIA to assassinate an American citizen in Yemen, Anwar al-Awlaki, despite the fact that he had never been charged with (let alone convicted of) any crime, and the agency successfully carried out that order a year later with a September, 2011 drone strike. While that assassination created widespread debate – the once-again-beloved ACLU sued Obama to restrain him from the assassination on the ground of due process and then, when that suit was dismissed, sued Obama again after the killing was carried out – another drone-killing carried out shortly thereafter was perhaps even more significant yet generated relatively little attention.

Two weeks after the killing of Awlaki, a separate CIA drone strike in Yemen killed his 16-year-old American-born son, Abdulrahman, along with the boy’s 17-year-old cousin and several other innocent Yemenis. The U.S. eventually claimed that the boy was not their target but merely “collateral damage.” Abdulrahman’s grief-stricken grandfather, Nasser al-Awlaki, urged the Washington Post “to visit a Facebook memorial page for Abdulrahman,” which explained: “Look at his pictures, his friends, and his hobbies His Facebook page shows a typical kid.”