‘Looks Like Trump Wasn’t Playing Around’: President Was Told Pence in Danger Just Minutes Before Twitter Attack on VP 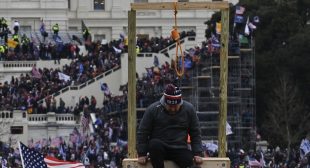 Revelations that Donald Trump was told that Mike Pence had been whisked from the Senate floor just minutes before the former president decided to tweet an attack on his own vice president has added to the already staggering body of evidence that any stated concerns Trump had about the violent mob which stormed the Capitol Building on January 6 came secondary to his private approval of and participation in what transpired that day.

The new evidence for a damning timeline came from Sen. Tommy Tuberville (R-Ala.) who on Wednesday night told reporters that he personally talked to Trump just after Pence and his aides were ushered away by the Secret Service.