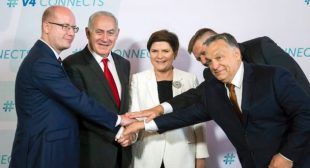 Prime Minister Benjamin Netanyahu launched a blistering attack against the European Union during a closed-session meeting Wednesday morning in the Hungarian capital of Budapest, telling the premiers of Hungary, the Czech Republic, Poland and Slovakia that the EU’s behavior toward Israel is crazy
read more: http://www.haaretz.com/israel-news/1.802143