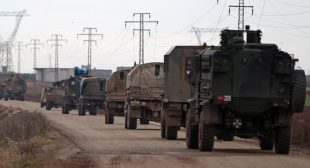 Peskov said that Russia and Turkey will jointly investigate the deadly incident. The Kremlin spokesman said that Putin told Erdogan that Turkish soldiers had died as a result of lack of coordination regarding coordinates during Russian military jets’ strikes in Syria.

Russia and Turkey will improve coordination of activities in Syria after the unintentional strike, Peskov said.