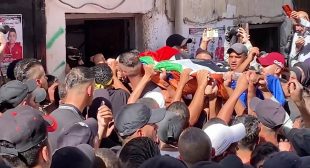 Israeli forces have killed another Palestinian teenager in the occupied West Bank. On Tuesday, 15-year-old Imad Khaled Saleh Hashash was shot in the head while standing on the roof of his home. At the time, he was reportedly attempting to use his phone to document Israeli troops raiding the Balata refugee camp near Nablus. Imad is the 12th Palestinian child killed by Israeli forces with live ammunition this year, according to the group Defense for Children Palestine.