Human Rights Watch: apparent war crimes by Israel during May attack on Gaza 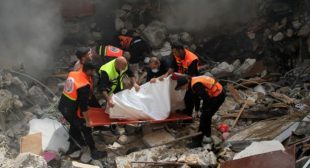 Human Rights Watch investigated several Israeli attacks that resulted in particularly high numbers of civilian casualties – with no evident military target – and determined that the incidents may have been war crimes. Other Israeli attacks during the conflict were also likely unlawful.
During the 11-day escalation, attacks by the Israeli military killed 260 Palestinians, including at least 129 civilians, of whom 66 were children. 12 Israelis were killed.