He and his wife got COVID-19. She died last week. This week, he went maskless to anti-vaxx rally 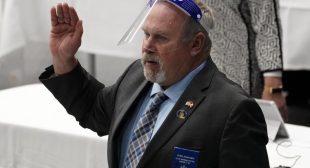 At the end of July, Republican Rep. Chris Johansen of Aroostook County, Maine, was reportedly recorded by Mariner News contributor Crash Barry saying, “Listen up, I’ve got COVID and I’m really, really sick and I just don’t have time to talk to you today.” It was news because Johansen, along with his wife Cindy, have been very vocal and demonstratively anti-mask and anti-vaccine. Johansen’s anti-science stance led to him and six other Republican representatives getting stripped of their committee assignments after entering the Maine State House without wearing masks “in violation of legislative rules that go beyond state recommendations” back in May.

On Aug. 10, Cindy Johansen reportedly passed away after struggling for almost a month with the virus. Her death was confirmed by The Daily Beast and the Maine Republican Party. A week after her passing, Chris Johansen appeared at an anti-vaxxer mandate demonstration in Augusta.