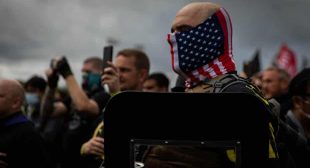 In the 20 years since 9/11, far-right extremists killed more people in the US than did American-based Islamist fundamentalists – but that’s often hard to discern from the way the federal government has treated domestic terrorism.

Earlier this year an intelligence report warned that racially-motivated extremists posed the most lethal domestic terrorism threat. It said the menace was now more serious than potential attacks from overseas, and the White House published a strategy for countering the problem.