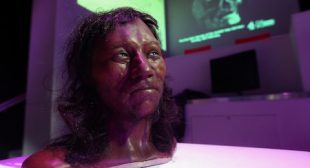 he earliest Britons were black-skinned, with dark curly hair and possibly blue eyes, new analysis of a 10,000-year-old Somerset skeleton has revealed.

Scientists at the Natural History Museum have used pioneering genetic sequencing and facial reconstruction techniques to prove that the first hunter-gatherers successfully to inhabit Britain were far darker in complexion than previously thought.

The groundbreaking discovery was made in a “stroke of luck” after archeologists found scraps of DNA in the ear of the Mesolithic “Cheddar Man”, the oldest complete skeleton ever found in the UK and one of the museum’s most treasured specimens.

The results show, contrary to popular belief, that the founding generations of Britons owed more in appearance to Paleolithic Africans, from whom all humans descend.