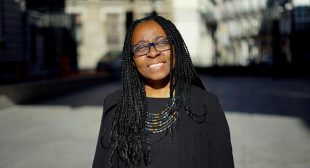 For some 20 years, Bosaho worked as a nurse’s aide at a hospital in Alicante. At 35, she earned a degree in history and started a Ph.D.; her studies, her son and her work consumed her time. Then came 2008 and la crisis — the Spanish term for the worst economic meltdown in decades: Unemployment soared past 25 percent, stoking social discontent. Bosaho, who’d never been affiliated with any political party, felt compelled to join the anti-austerity movement pushing back on the government’s policies to cut public spending. The group took to the streets throughout Spain on May 15, 2011, in what Bosaho calls her “awakening moment.” Three years later, she helped launch Podemos in Alicante.

After representing Podemos in regional elections in May 2015, Bosaho was selected as the lead candidate on the Podemos list for Alicante that November. The general election saw a record number of women voted into the country’s lower Parliament, with about 138 female MPs, compared to 125 women elected in 2011. Gender parity for Spain’s Parliament, however, is still a way off: Women account for 39 percent of MPs.