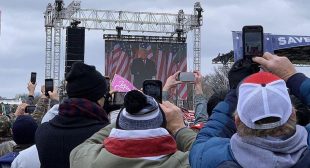 Donald Trump is being sued by a group of seven Capitol Police officers for his role in the January 6 insurrection in what is being called the “most expansive civil effort to date” to hold the former president and his associates and allies accountable.

The lawsuit accuses Trump “and nearly 20 members of far-right extremist groups and political organizations of a plot to disrupt the peaceful transition of power during the Capitol riot on Jan. 6,” and implicates “members of the Proud Boys, the Oath Keepers militia and Trump associates like Roger J. Stone Jr.,” The New York Times reports.