Biden Is Reversing Trump Anti-Immigrant Acts. Will He Repair Harm from Deportations Under Obama? 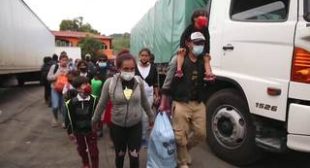 President Joe Biden has placed immigration at the center of his ambitious agenda, signing several executive orders reversing Trump anti-immigrant policies and promising a pathway to citizenship for 11 million undocumented immigrants in the United States. But Biden is not only navigating the destructive legacy of his immediate predecessor, but also that of the Obama administration when he was vice president, which oversaw 3 million deportations. âThese are people who had families, jobs and homes in the United States,â says investigative journalist Jean Guerrero. âWhat he needs is not just to reverse Trump policies and go back to Obama-era policies. He needs to actually repair the harm that was done when he was vice president. Guerrero also urges Biden not to carve out exceptions that exclude immigrants with criminal records, including members of her own family.