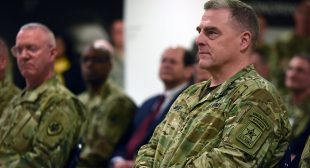 General Mark Milley, President Donald Trump’s top military adviser and the Chairman of the Joint Chiefs of Staff, assembled senior military officials in charge of the National Military Command Center two days after the January 6 insurrection, telling them they were not to take orders from Trump if he were to launch a nuclear attack unless Milley was involved in the decision-making procedure.