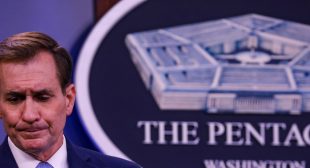 A trio of senators, including Bernie Sanders of Vermont, issued a statement late Thursday condemning the U.S. military’s drone strike in Somalia earlier this week, the first known bombing of the East African country since President Joe Biden took office in January.

“We’re troubled that no one in the administration sought the required legal authorization from Congress for Tuesday’s drone strike in Somalia especially with no American forces at risk—and apparently, did not even check with our commander-in-chief,” Sanders, an independent, said in a joint statement with Sens. Chris Murphy (D-Conn.) and Mike Lee (R-Utah).