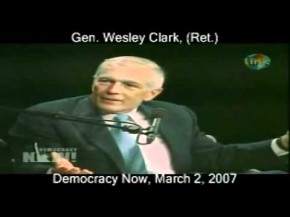 General Wesley Clark reveals the US plan to invade and take over 7 countries, Iraq, Syria, Lebanon, Lybia, Somalia, Sudan, And Iran, before we even invaded Afghanistan. The first part of the plan was revealed 10 days after 9/11 and was expanded to included the other nations. Clark is quoted as saying the invasion wasn