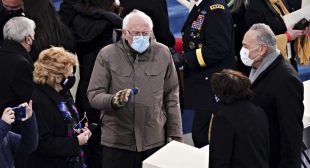 With President Joe Biden sworn in and Democrats set to officially take control of the U.S. Senate Wednesday afternoon, incoming Budget Committee Chairman Sen. Bernie Sanders argued that the majority party must waste no time pushing ahead with an ambitious agenda aimed at confronting the immediate crises of Covid-19, economic calamity, and climate change and setting the U.S. on a more just and equitable path.

“The people are demanding action,” Sanders said in an appearance on CBS News following Biden’s inauguration. “The times call out for bold action on the part of the Congress, for a willingness for us to stand up to powerful special interests who want to maintain the status quo. That’s what we gotta do, and we gotta do it quickly.”